This post contains statistics on usage of English language.

1. How many people speak English?

Spoken by 1,453 million (native + non-native), English is the most-spoken language in the world by number of speakers.

Note: Non-native speakers of a language speak the language as their second language (L2). (I hope that’s not confusing.) If you come across a number significantly higher than 1,453 million, then it most likely includes L3 as well.

Here is a comparison of most-spoken (native + non-native) languages:

Source: Ethnologue, 25th edition (released in Feb 2022). Ethnologue, in their own words, is an authoritative resource on world languages, trusted by academics and Fortune 500 companies alike.

2. How many people speak English natively?

3. Countries with most native speakers of English

4. Countries with most non-native speakers of English

Note that this isn’t a reflection on quality of English they speak. There is a separate ranking for that, but it measures ‘English proficiency’ through online test, which would hardly be able to measure someone’s speaking prowess.

5. What % of English conversations involve only native speakers?

6. English is ‘the’ language on internet

English is the dominant language on internet. Nearly 58 percent of content on the internet is in English. Russian, at around 5 percent, is a distant second. (The data pertains to 10 million websites with most traffic.) Here is the top-10 list:

Source: Historical trends in the usage of content languages for websites, W3Techs (as on 01 January 2023)

7. English is the language of technical and scientific periodicals

More than 50 percent of world’s technical and scientific periodicals are in English.

8. English can have outsized impact in some countries

In countries where English is not the first language for most people but where work is regularly transacted in English, English can have an outsized influence.

9.1 Number of words in English Language

Putting a number to words in English language is not easy because, first of all, it’s not even clear what constitutes a word.

There are many questions on what constitutes a word, most with differing answers. And therefore, depending on the source you’re referring to, you’ll find multiple word counts in English language.

As per Oxford Dictionary, there are:

Native speakers who grew up in an English-speaking country and went to college typically have a vocabulary size of 25-30,000 words.

(The above range is a rough, commonly-accepted estimate. In reality, estimates vary widely. This source, for example, estimates that a 20-year-old native speaker of American English knows 42,000 lemmas (or dictionary words), and this knowledge can be as superficial as knowing that the word exists. This estimate, however, puts the vocabulary size of a college student to 16,785 words.)

Note that even native speakers have a command over just 4 percent of words in English language. (We’ll see later in the post that this small fraction covers almost all words used in spoken and written English.)

In contrast, non-native speakers typically have a vocabulary of 2-3,000 words. Source

Here is a pictorial comparison of vocabulary of native and non-native speakers: 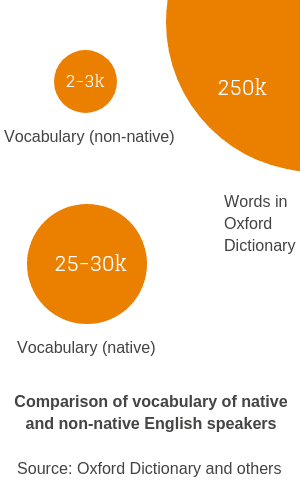 Note: Feel free to use the above and other images in the post, using the link of this post for reference/attribution.

9.4 Not all words are created equal

Native speakers cover almost all words used in common parlance in spoken and written English. However, you don’t need to attain their level of vocabulary to reach a high coverage of words in common English.

Dr. Brent Culligan, Joseph Phillips, and Dr. Charles Browne analyzed a corpus of 273 million words of spoken and written British and American English to come up with their New General Service List (NGSL) of 2,800 words. These words cover a whopping 92 percent of words people are likely to come across in average newspaper, magazine, TV show, book, movie, and so on. 92 percent coverage with only 2,800 words (around 10 percent of a native speaker’s vocabulary)! Recall Pareto (or 80-20) principle.

Anil is the person behind content on this website, which is visited by 3,000,000+ learners every year. He writes on most aspects of English Language Skills. More about him here:

Learn more
Send this to a friend