Recall how you acquired your first language.

Did you learn lots of grammar rules?

To quote Stephen Krashen, professor emeritus at the University of Southern California and a linguist with plenty of work in the field of second-language acquisition:

Language acquisition doesn’t require extensive use of conscious grammatical rules and does not require tedious drills.

Once you know basic grammar such as tenses, prepositions, different forms of verbs, and subject-verb agreement, additional dose of grammar won’t shine your spoken English further. What you need, instead, is more speaking practice. More inputs – listening and reading.

This post is for beginners who are struggling with even basic grammar and don’t know which part of the grammar to start from to make their spoken English better at least from the perspective of not making silly grammatically errors such as (mistakes have been highlighted by crossing them):

I can eat all five mango.

None of the friends have come to the party.

I meet him during lunch last week.

My friend has already left when I reached the mall.

Based on a sample of more than 30,000 students from 500+ colleges in India, National Spoken English Skills Report by Aspiring Minds paints quite a poor picture:

…a dismal 25% candidates understand usage of basic grammar constructs, like right use of articles and tenses.

According to the report, lack of grammar skills is the third biggest problem in spoken English after fluency and pronunciation. Only 18.7% candidates have reasonably good grammar skills.

Grammar plays a far more important role in writing than in speaking, but you must know at least the most commonly used rules in speaking. (The best way to imbibe these rules is to regularly read stuff you like and crawl portion of your reading.) Here are some:

There are four tenses – simple, continuous, perfect, and perfect continuous. Each of them has present, past, and future forms, resulting in 12 variations in all.

However, in conversations you rarely use more than a handful of these 12. Therefore, to keep it simple and not bog you down with too many variations, I’ll cover only those (8 out of 12) which are used the most (probably to the extent of 98+ percent).

Simple present tense is used to describe a habit or a general truth.

I walk in the park in the morning. [A habit]

Sun sets in the West. [A general truth]

Simple past tense is used to describe an event that started and finished in the past.

I walked in the park on Sunday evening. 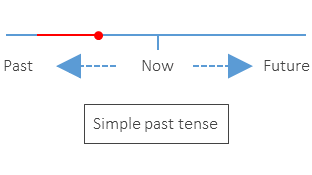 The red line above depicts the event in the past. The key here is the finish (red dot), which happened in the past.

Simple future tense describes an action you’ll do in future.

I will walk in the park tomorrow evening. 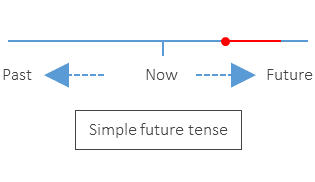 The red line above depicts the event in future. The key here is the starting point (red dot), which will happen in future.

Present continuous tense is used to describe an event that is happening at the moment.

I am walking in the park.

The action of walking is happening right now. In the moment. Not in future. Not in past. 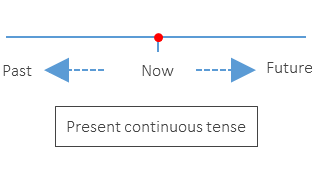 The red dot represents the event happening in the present.

I was walking in the park when someone stole my bike from outside the park.

In this example, past continuous tense describes the action of walking that was going on in the past when someone stole the bike (another event). 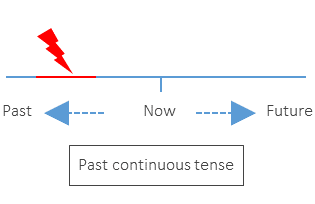 The red line above represents the action (walking) that was going on in the past when another event (bike stolen) – represented by lightening in red – happened.

Present perfect tense describes an action that started in the past, continued in the present, and now finished.

I have walked in the park for 30 minutes. 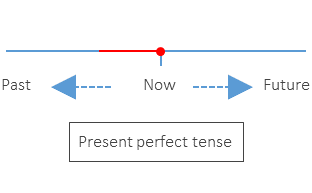 Past perfect tense describes an action you completed in the past before another event took place.

I had walked in the park when the rain arrived. 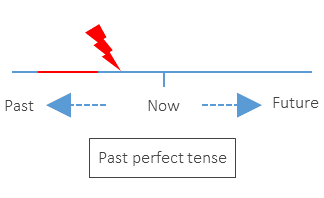 The red line represents the action of walking which happened before the rain arrived (represented by lightening).

Present perfect continuous tense describes an action that started in the past and is continuing in the present.

I have been walking in the park for the past 30 minutes.

Here, the action of walking started in the past (30 minutes back) and is still continuing (haven’t stopped walking). 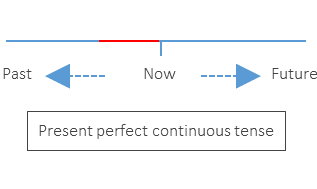 If you noticed, we used three different forms of the verb ‘walk’ in the section on tenses.

Depending on how past and past participle forms are formed from the present form, a verb can be classified as regular or irregular.

The past and part participle forms of a regular verb are formed by adding -ed to the verb.

The past and past participle forms of irregular verbs are formed in a way different from the one mentioned above. Irregular verbs can be broadly classified into three:

A. Verbs whose all three forms are same

B. Verbs whose two forms are same

C. Verbs whose all three forms are different

D. Some verbs, however, can be used both ways – regular and irregular

How to remember them?

Just memorize them. Good part is that there aren’t too many commonly used verbs.

This is a common mistake among beginners.

Subject and verb in a sentence should be in agreement with each other. Before we come to the two key rules of subject-verb agreement, let’s briefly look at what subject is (we know what verb is).

Subject in a sentence is the person or thing that performs the action of the verb. It may be noun, pronoun, or a combination of words.

In case of doubt, ask the question ‘who did this’ or ‘what did this’. The answer will be the subject.

He fell down from the bike.

The cop nabbed the thief after a hot chase.

Abhishek goes for a morning jog on weekdays, but plays cricket on Sunday.

[Comments: Ask the questions ‘who fell’, ‘who nabbed’, and ‘who goes’, respectively to know the subject in the sentence. The underlined parts are subjects in the above sentences. Here, ‘fell’, ‘nabbed’, ‘goes’, and ‘plays’ (the last sentence has two) are the verbs, describing action.]

Here is the most important subject-verb agreement rule:

I easily run two kilometers without stopping for a breath.

You need to improve your attitude.

Although there are other rules on subject-verb agreement, the above rule will serve your purpose for most cases while speaking.

Prepositions are words or group of words that relate a noun or a pronoun to another word in a sentence. Examples:

The book is on the table.

The book is under the table.

The book is behind the dictionary.

Learn how common prepositions such as at, on, in, between, among, in, into, from, to, until, by, since, for, within, by, with, across, along, over, through, above, over, below, under, during, while, for, before, during, after, beside, and besides are used to avoid embarrassing mistakes like:

I’ve not been to London since five years.

In the picture, I’m standing besides my teacher.

Can you pour the water in the bottle?

The helicopter flew above me.