Do you fear speaking in English because you worry your friends will make fun of you, what others would say on your mistakes?

Do you fear speaking in English in presence of others because yours is not as good as theirs?

Why should you care about this?

Stephen Krashen, professor emeritus at the University of Southern California and a linguist with plenty of work in the field of second-language acquisition, points out that affective filter (factors such as hesitation, fear of making mistakes, and mood that affect language acquisition) inhibits our ability to acquire second language. We know this intuitively, don’t we?

These factors inhibit – and in many cases, completely throttle – your ability to speak well.

Here are the four ways you can overcome your hesitation to speak in English:

You can’t get fluent in a language without making mistakes. They’re an integral part of the process. Period.

Here are experiences of few language learners and teachers:

Benny Lewis considers perfectionism to be the enemy of learning any language. To quote him:

When we learn a language, we are such perfectionists, we want everything to be just right, and perfectionism is a really bad thing in language learning…

It’s okay to make mistakes. And I actually have a goal to make at least 200 mistakes a day because then I know I’m getting somewhere, I’m using the language. So embarrass yourself. Go out there. Talk to people.

Matthew Youlden: he speaks around 20 languages

Because we learn by making mistakes. It’s actually the only way we can get things right. As children, we’re even expected to make them. But as adults, we are apprehensive because they make us feel vulnerable.

Sid Efromovich, another master language learner who speaks seven languages, says making mistakes is one of the five principles of language learning he followed:

…the golden rule of language learning, the most important thing, is to get things wrong, to make mistakes.

He says – and that’s commonsense – that when we’re learning a new language we’re expanding our database of sounds and other language-related stuff and therefore are bound to make mistakes:

That [making a mistake] is the trigger that you need to look for. Because that is the signal that tells you that you’re going beyond your database and that you’re allowing yourself to explore the realm of the new language.

Marianna Pascal: she has helped professionals speak better for 20+ years

Marianna Pascal has helped professionals in Malaysia and other Southeast Asian countries to speak better English for over twenty years. She says people who don’t feel embarrassed on making mistakes, don’t feel judged by others, don’t feel shy are the ones who communicate the best in English.

Scott and Vat: they learnt 4 languages from scratch

Scott and Vat were scratchy and full of mistakes in the beginning when learning four new languages, but because they kept trying, they got better. They, in fact, call making mistakes ‘very good’. Listen what they’ve to say on making mistakes (duration: 52 seconds):

(Learning through mistakes holds true for organizations as well. Google, for example, has seen so many of its products bite the dust and so many acquisitions gone kaput. But because they’ve tried so many things, they also have several smash-hit products and acquisitions, lifting them to where they are.)

So by all means make mistakes, but also be keen to correct them and improve. Let people think what they think. Remember, without opening mouth, you’ll never become fluent.

Countless people don’t attempt speaking in English because their close-knit group wouldn’t like it. Because their friends would make fun of them.

You can’t wish away people who make fun of you when you speak in English. You’ve to simply ignore them, keeping in mind your larger purpose (next point in this post). If you don’t speak because of them, you’ll – along with them – eventually rue the missed practice (see the case study at the end of the post). So, ignore them and focus on what you ought to be doing. That, however, doesn’t mean you break your friendships. It only means you find 1-2 other friends whom you can talk to in English.

If you’re motivated enough, you’re more likely to plough through your hesitations. This brings us to our next point.

Fluency in English has a strong correlation with professional success.

To give an example from India, here are few worrying statistics from National Spoken English Skills Report by Aspiring Minds (sample of more than 30,000 students from 500+ colleges in India): 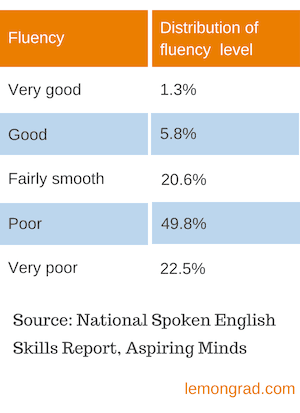 Only 7.1 percent fall in ‘good’ or above category, with only 1.3 percent being in ‘very good’.

And more food for thought: 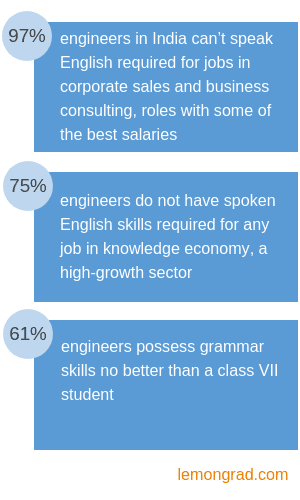 Nandan Nilekani, co-founder and former CEO of Infosys (USD 10 Billion + revenue), in his keynote at IIT Madras convocation ceremony left two key messages with the graduating students: don’t stop learning and develop soft skills. He was addressing students at IIT, but he didn’t talk about technology or engineering. He spoke of fundamentals – if you’re good at these, you can very well master other things.

There are plethora of studies and anecdotal evidence that unequivocally point to role of verbal fluency in professional success. Graduates even from the best undergrad and grad institutions in the world have sub-par career results for want of strong communication skills.

If you’re fluent in English, you’ll pull away from many other job-seekers and colleagues, and open opportunities for yourself in fields where, otherwise, you may be an outcast.

Getting better at something that plays such an important role in your professional and social life should be a strong motivator for you. Remind yourself of the benefits you’ll accrue or many opportunities you’ll miss if you can’t communicate well in English. And, very important, unlike math, science, history, literature, and others, English is not a subject. It’s a skill that will last your lifetime – all the more reason to be good at it.

This brings us to the last point, which is also my favorite. I’ve seen people not trying hard enough because they mistakenly believe that they simply don’t have the talent to speak fluently like others do.

4. Everyone has the potential to speak fluent English

At the most fundamental level, any skill – tennis, basketball, and even walking – is acquired through building relevant neural connections in the brain. The stronger these connections are for a particular skill, the more proficient we are in that skill.

Here is how these neural connections are formed (duration: 2:03 minutes):

English language is no different. It’s also acquired through building its own neural connections. And the way to build strong neural connections is to practice the skill and improve on elements you’re lagging in (that’s key). 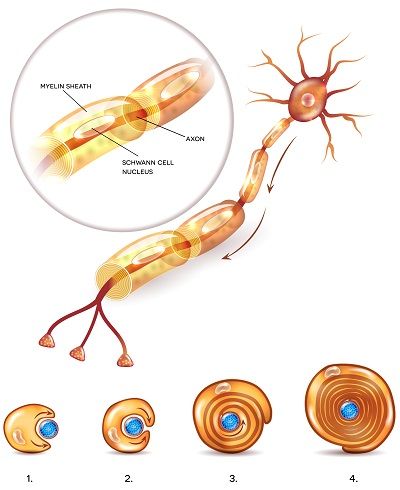 There is no starting difference between yours and a fluent speaker’s neurons. Lack of intelligence or inborn ability or being from an average background is not the reason for poor spoken English. You’re no way disadvantaged in terms of fundamental attributes required to learn English.

The reason your English skills are poor is you haven’t practiced enough, you haven’t improved your weak areas. If you start today, you too will become good at these skills. Many, however, give up thinking you can’t get better at English Language skills because you lack something fundamental – background, genes, etc. That’s not the case.

You may read more on the topic in this post on why everyone has the potential to speak fluent English.

I met a recent graduate at the institute where I developed the curriculum for Communication Skills course. He was one of the few persons who couldn’t land a job through on-campus placement, main reason being poor communication skills.

I asked him what he planned to do in the coming weeks and months. He replied that he would apply to different companies on his own and if he still doesn’t get a job, he would consider writing entrance exams for MBA programs and government jobs.

What he didn’t realize was that in all the options he was considering he’ll have to face interview. There too his communication skills will be exposed. Imagine, working hard for months for the entrance exams only to face disappointment because of a 30-minute interview. His communication skills dramatically reduced good options from his plate even though he was strong in academics. And there was no short-term solution to his problem. That’s what hit me.

He finished by saying that his biggest regret during his four years at the college was that he didn’t try speaking in English despite wanting to because of peer pressure. His peers, his friends are gone now and he has to fend for himself.

Well, this is an extreme, but common, case. However, there are many times more people who settle for a lesser job (in terms of prestige, nature of work, and remuneration) for the same reason – poor communication skills.

Don’t let hesitation to speak do the same to you.

2. Don’t fall to peer pressure. Remember the case study in the end?

3. Strong communication skills is a lifelong and life-changing asset. This should be a strong reason to overcome your hesitations.

4. You and fluent speakers start at the same point. You have the same ability to learn as them. They’re no way superior to you by way of possessing different genes. But because you believe that you don’t have it in you to learn English language, you don’t try hard enough, thereby making the belief a self-fulfilling prophecy.