Adopt Spaced Repetition System. Retain More of What You Study.

Do you forget stuff in few weeks even if you study it diligently?

I know the answer. Almost everyone faces this forgetfulness.

Wouldn’t it be awesome if we can retain what we study (wider connotation than just academics) for long?

Yes, it would be… and it is possible through spaced repetition.

What is spaced repetition?

We retain only a fraction of what we learn the first time.

People usually forget 90 percent of what they learn in a class within 30 days. And the majority of this forgetting occurs within the first few hours after class.

You can blunt this decay in memory and retain stuff for long through spaced repetition.

If you review a newly-learnt material after a day, then after a longer duration (a week or so), and then again after an even longer duration (a month or so), you retain much more. In other words, more the repetitions at increased gaps, the more you retain. Dr. Medina says:

The way to make long-term memory more reliable is to incorporate new information gradually and repeat it in timed intervals.

However, in the subsequent repetitions, don’t just passively read from your notes or books. Recall without referring to them. Blurt out your own understanding. This is key to benefitting from spaced repetition.

The efficacy of spaced repetition has been supported by research too.

Schematically, spaced repetition can be represented as follows: 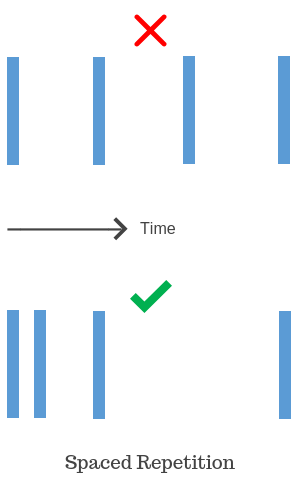 And fundamentally understood through forgetting curve: 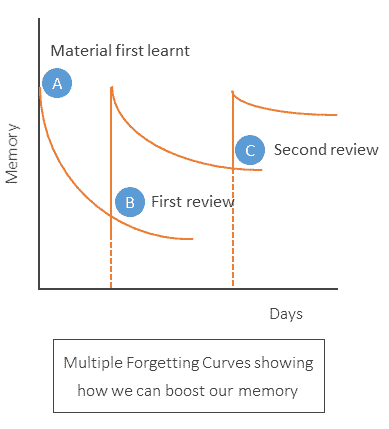 Repeating the same stuff 3-4 times? Isn’t that time-consuming? Even time-wasting?

It takes much less time than what you think.

Because your first review (point B) comes within a short period of studying the material, most of it is fresh in mind when reviewing, and, therefore, it takes much less time than studying the first time. Your second review will be even quicker, dropping almost exponentially, and so on. 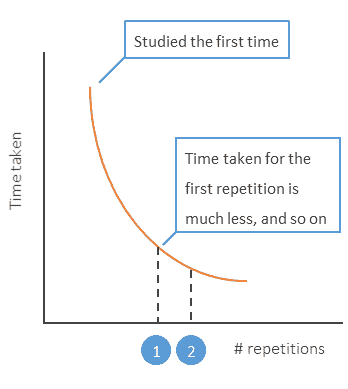 (This has been my experience in several of my experiments in memorization.)

But, if you review the first time after a long gap, you’ll forget most of the stuff by then, and your first review will take much, much longer than in the case we just discussed. You’ll have to practically redo the stuff, which will essentially take far more time than multiple repetitions in spaced repetition. And I haven’t even talked about the efficacy of spaced repetition in retaining the material – the primary goal.

The number of repetitions and the fixed duration between repetitions may look daunting to you, but you don’t need to be fussy about them. Instead of four, you can have two or three repetitions. You can also be flexible with the gap between two repetitions. (Only constraint is to keep the first repetition within a day, as decay in memory is faster in the beginning.) You’ll still get strong results.

An observation that prompted me to adopt spaced repetition

Five years back, I used to login quite frequently (at least once a week) into one of my early bank accounts. In due course, I had another bank account, which became my primary account. Hence, the frequency of logging into the first account dropped, and, eventually, stopped.

Nearly two years after my last login, I was forced to use my first account again to confirm a past transaction. I logged in. Saw the transaction. Logged out.

Minutes after logging out, it struck me how effortlessly I keyed in the username even though I hadn’t used it for two years. And it was a nine-digit numeric username not rhyming in any particular pattern: in short, a username not easy to remember. (Password was easy, as I had set it.)

What was happening here?

Spaced repetition by way of keying in the username several times, whenever I logged in earlier.

This chance experience was just a beginning. Since then, I’ve used spaced repetition at some big tasks.

I’ve added more than 3,400 words to my pronunciation list, and in one of the experiments, I recalled pronunciations of more than 1,000 words with an accuracy of 95+ percent after last calling their pronunciations out more than two years back. This is not to boast, but to tell you that you too can achieve similar results in almost any field by following this process.

I’ve also adopted spaced repetition for shifting more than 8,000 words from my passive to active vocabulary. This has been a far tougher exercise than learning pronunciation.

I tested spaced repetition with my book-reading. When I read a book, usually non-fiction, I highlight the stuff I like, and go through the highlighted part and the key messages of the book within a day or two of finishing it. This helps me retain the stuff better. However, when I finished Switch: How to Change Things When Change Is Hard, I didn’t review it at all. And when I picked up the book again after nearly two months, I had to re-read large portions of it to refresh the content. In contrast, it takes much less time to recall content of the books which I reviewed within a day or two after finishing them.