Ever got stuck on multiple-choice questions in a test where you were not certain about the answer? Or, you had to rush through the last few questions due to paucity of time.

When faced with such situations, the best you can do is eliminate as many options as possible and make an educated guess.

But, are you really making educated guesses?

Or, are you just randomly picking one of the remaining (after eliminating the options you can) options?

Here are the hacks, or you may call them test-taking strategies, for multiple-choice tests – some of them used by me over the years – you can use to smart-guess. These strategies are supported by data, too, which has been drawn from Rock Break Scissors: A Practical Guide to Outguessing & Outwitting Almost Everybody by William Poundstone. (He crunched statistics on a sample of 100 tests – 34 from schools and colleges and 66 from other sources, comprising of 2,456 multiple-choice questions. These tests included middle school, high school, college, professional school exams, driver’s practice tests, US Naturalization Self Test, newspaper quizzes, and so on.)

Without further ado, here are six hacks you can use when taking multiple choice tests:

1. How to guess answers to true-false questions?

In true-false tests, true (T) answers are more common than false (F): according to Poundstone’s analysis, on an average, 56% answers are T and 44% F.

It’s not hard to see why. True statements come to our mind naturally, and hence with less effort, but we need to make up a false statements, which requires more effort? No wonder, more T answers creep in question papers, as test makers unwittingly take the path of least resistance.

Another pattern in true-false tests: two same responses (TT or FF) in a row are less likely than two dissimilar responses (TF or FT).

To give an example from Poundstone’s book, the answer key to 21 questions from a college textbook (Plummer, McGeary, Carlson’s Physical Geology, ninth edition) is:

At the first glance, the answers seem to be randomly distributed.

In this sequence, two successive responses are same seven times out of nineteen (the twentieth answer has no successor). That is, the chance that the next answer will be different from the present one is 63% (12/ 19), which is higher than the expected 50%, if it was completely random.

Check it out for any test. You’ll find it to be true on most occasions.

Let’s understand how to apply these two hacks through a hypothetical test with ten true-false questions.

Step 1: As always, first mark the answers you know. Let’s say you know the answers to questions 3, 5, 6, 8, and 10. After you’ve marked these answers, your answer sheet looks like this:

Step 2: Now, come to the questions where you’re clueless. Of these, first pick those whose both the neighboring responses are same (either both are T or F), and choose the opposite of that as the answer. Here, question 7 has both its neighboring answers T, so pick F as the answer for 7. The answer sheet now is:

Step 3: When preceding and succeeding answers are different, then pick T as your response because T is likelier than F. So, we pick T for both 4 and 9. The answer sheet now is:

Step 4: You’re now left with the first two questions. Here, TF will be the best answer, as it’ll form a non-repeating pattern.

2. How to guess answers to multiple-choice questions?

Through his data, Poundstone found following probabilities in case of multiple-choice questions:

So, B and E are better guesses in a 4-option and 5-option multiple-choice tests, respectively, than picking the middle answer, a common guess hack, or a random guess.

And, like the case of true-false, here too Poundstone’s analysis showed that the answers in multiple-choice tests are less likely (than a completely random one) to repeat the previous answer.

Here is an example.

Consider following three questions (#28-30) in a test in which you know answers to questions 28 and 30: B and D, respectively. But the only thing you know about #29 is that option C can’t be the answer.

How do you go about answering #29?

First, rule out any choice that you know for sure is wrong. Here, it’s C. Of the remaining three options A, B, and D, you give one vote to B because B is most likely to be correct (albeit by a small %) in a four-choice test.

Also, because answers are less likely to repeat, give one vote to A and none to B and D. 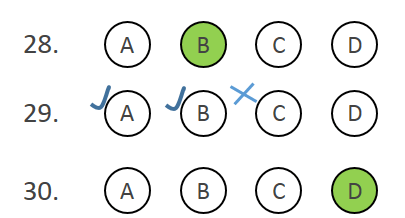 Now, you’ve one vote each for A and B, and because they get equal votes, pick any of the two as the answer to 29.

Repeating the process we just followed in the previous example, B gets two votes and D, one. 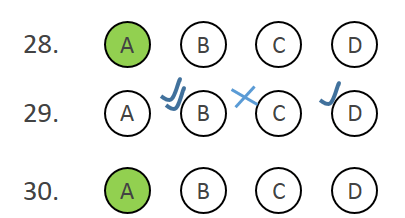 So, the guess here is B, the one with the higher vote.

Why college is less important than you think?

How to stop worrying during the entire exam cycle?

How to avoid choking while writing exam?

3. Outlier options are less likely to be correct

Contemporary authors are much more at liberty to be candid than were authors of previous centuries, but modern writers nevertheless often find themselves ——– portions of their work.

Here, options B, C, D, and F show similar intent (finding fault, critic, disapprove etc.) in meaning. Whereas A and E are different in meaning, and hence outliers. Correct answers: B & F

This is a simple question, but if you’re running short on time and have no option but to guess, then you can eliminate the first answer, using outlier-hack.

The correct answer here is D.

If (x, y) is the solution to the system of equations above, what is the value of x – y?

Using outlier-hack, you may narrow down your zone of consideration to B and C or drop A and D.

The correct answer is C.

In the first example (contemporary authors …), if A or E was the correct answer, why would the test maker take so much pain to create four similar wrong answers? It’s hard to create closer-looking, closer-meaning responses than disjointed. Moreover, it’ll make it easier for the test-takers because if I know that the meaning of words in either A or E fits better with the context of the question, I can immediately rule out four options (whose meaning doesn’t go well with the context).

4. Universal qualifiers are more likely to be correct

Contrary to popular guess-practice of avoiding answers which have universal qualifiers such as always, none, never, and all, they’re in fact best guesses as per Poundstone’s analysis. He found that none/ all answers in his sample were correct on whooping 52% occasions.

Well, it’s contrary to what even I believed. And, therefore, I checked it myself on three tests and found it to be largely correct – the lowest correct response rate being 37% and the highest, 50%.

5. Grammatical clues can throw up the answer, sometimes

Look for grammatical clues or ways in which a response, when combined with the stem, makes for a better sentence.

A word used to describe a noun is called an:

In this example, only ‘Adjective’ starts with a vowel and hence the only option which forms grammatically correct sentence when combined with the stem.

Which option would do the most to promote the application of nuclear discoveries to medicine?

B. Developing standardized techniques for treatment of patients.

C. Do not place restrictions on the use of radioactive substances.

D. If the average doctor is trained to apply radioactive treatments.

Here, option (B) fits grammatically with the stem, which also happens to be the correct answer.

6. Longest response is more likely to be correct

The longest response (of course, in non-quant answers) has a greater chance of being the correct one, because test makers tend to load the correct response with qualifying language to make it unambiguously correct.

Which of the following is the best indication of high morale in a supervisor’s unit?

A. Employees are rarely required to work overtime.

B. Employees are willing to give first priority to attaining group objectives, subordinating any personal desires they may have.

C. The supervisor enjoys staying late to plan the next day.

D. The unit gives expensive presents to each other.

Here, too, the longest answer is the correct answer.

To turn right, you should be in:

A. The left lane.

B. The center lane.

C. The lane that’s closest to the direction you want to go.

D. Any one of the lanes.

The correct answer (C), here, is also the longest.

These hacks are not replacement for knowing your subject

No doubt, these hacks are better than wild guessing. But they can’t replace certain knowledge on a topic.

Moreover, their effectiveness increase dramatically when combined with certainty that eliminates few options or that gets neighboring questions right, for example.

Smart-guessing is always better than random-guessing, and it can get you those extra, defining marks. Some of the guess-hacks you can use are:

If you’re inquisitive type, you can test these rules on the sample or real tests that you plan to take and you never know you may unearth a new hack.

Question: Have you used any of these guess-hacks? Or some other? Feel free to share your experience in the space below.