Why Shashi Tharoor’s ‘Word of the Week’ is Not a Good Idea?

Hindustan Times (HT), a leading Indian English-language newspaper, started a weekly vocabulary column, Word of the Week, in April 2019. The weekly word comes from none other than Shashi Tharoor.

Those who don’t know who Shashi Tharoor is, he is a three-term Member of Parliament, former minister in Government of India, a scholar, and author of multiple best sellers. Prior to his career in politics, he served in United Nations for more than twenty-five years and, in 2006, he finished second behind Ban Ki-moon in the selection of United Nations Secretary General. He is an articulate speaker in English and is known for using some really uncommon words – the most popular being ‘farrago’ – in his communication.

So far (till 02 November 2019), following words have found place in this weekly column (I may have missed a word):

Is Word of the Week serving any purpose?

The stated purpose of Word of the Week is ‘helping you expand your vocabulary’.

Before we get into the thick of the stated purpose, let’s ask a fundamental question: why does one expand vocabulary?

We expand our vocabulary to use new words we’ve learnt in our communication – written and verbal. Only few learn new words to score brownie points, right?

(If you’re interested in the topic of vocabulary building, you may find the post on how to improve your vocabulary in a way that you can use it in speech and writing useful.)

But you can’t use most of the words featured in Word of the Week because they’re too complex for people to understand. And if people don’t understand them without scratching their head or referring to a dictionary, then any communication containing them is not effective. So what’s the point in learning such words?

Word of the Week is clearly not serving any purpose for most.

It may, however, be doing an unintended disservice to many. Many impressionable minds may draw an erroneous conclusion that difficult words are essential for good communication especially when they see it coming from an erudite person and articulate speaker like Shashi Tharoor. (Update: I came across a college student who was trying to use cwtch – one of the words in the above list – inspired by Mr. Tharoor. I’m sure there will be many more, as my sample is tiny.)

How commonly are these words used?

We can determine how commonly – or uncommonly – a word is used through proxies, and Google Books Ngram Viewer provides one such proxy.

It can check all digitized books between year 1500 and 2008 and tell how often a word has been used in millions of books. But, unfortunately, we’ll miss data on recent use (post 2008), which probably is more relevant than how often a word was used in, say, 1980s.

A better proxy for how popular a word is how many times people use it on the web, and Google search can tell us that. It provides data that is not only recent, but also more relevant (people writing on the web are more commoners than authors of books in terms of writing skills, and therefore data from Google search is closer to day-to-day communication).

A Google search of the word in quotes throws up the number of times that word has been used on the web. For example, searching “defenestrate” throws up 178,000 results. 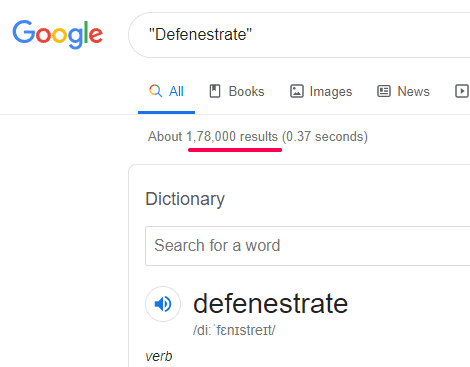 If we perform a similar search for other words in the list, we get following result (note that these numbers may change somewhat if you search on some other day):

Only few words (those in green) are being used to some extent. (Note that compared to tens of millions of results that Google spits out for the most complex queries, 100,000+ is nothing.) Even among those in green, if you ask me, only juggernaut, lunacy, phobia, prepone, zealot, oxymoron, and satyagrah are worth knowing.

Microsoft Word, for all practical purposes, is quite good at picking a non-existent word by showing an ungainly red wavy line below such word. But it doesn’t recognize surprisingly high proportion of words (nearly 50 percent) from this list, indicating that these aren’t commonly-used words.

Also, majority of these words don’t figure in two of the most popular online dictionaries – Cambridge Online Dictionary and Oxford Learner’s Dictionary.

Don’t add words to your vocabulary that vast majority of people will fail to understand.